In this tutorial, we will look at the dynamical systems introduced in the first tutorial through a different lens.

This property — that the present state entirely determines the transition to the next state — is what defines a Markov process and systems obeying this property can be described as Markovian.

The goal of Tutorial 2 is to consider this type of Markov process in a simple example where the state transitions are probabilistic. In particular, we will:

This video covers a definition of Markov processes and an introduction to ion channels opening/closing as an example of a telegraph process.

Let’s consider a Markov process with two states, where switches between each two states are probabilistic (known as a telegraph process). To be concrete, let’s say we are modeling an ion channel in a neuron that can be in one of two states: Closed (0) or Open (1).

In the simulation below, we will use the Poisson process to model the state of our ion channel at all points \(t\) within the total simulation time \(T\).

As we simulate the state change process, we also track at which times throughout the simulation the state makes a switch. We can use those times to measure the distribution of the time intervals between state switches.

You briefly saw a Markov process in the pre-reqs statistics day.

Run the cell below to show the state-change simulation process. Note that a random seed was set in the code block, so re-running the code will produce the same plot. Commenting out that line will produce a different simulation each run. Referred to in video as exercise 2A

We now have switch_times, which is a list consisting of times when the state switched. Using this, calculate the time intervals between each state switch and store these in a list called inter_switch_intervals. 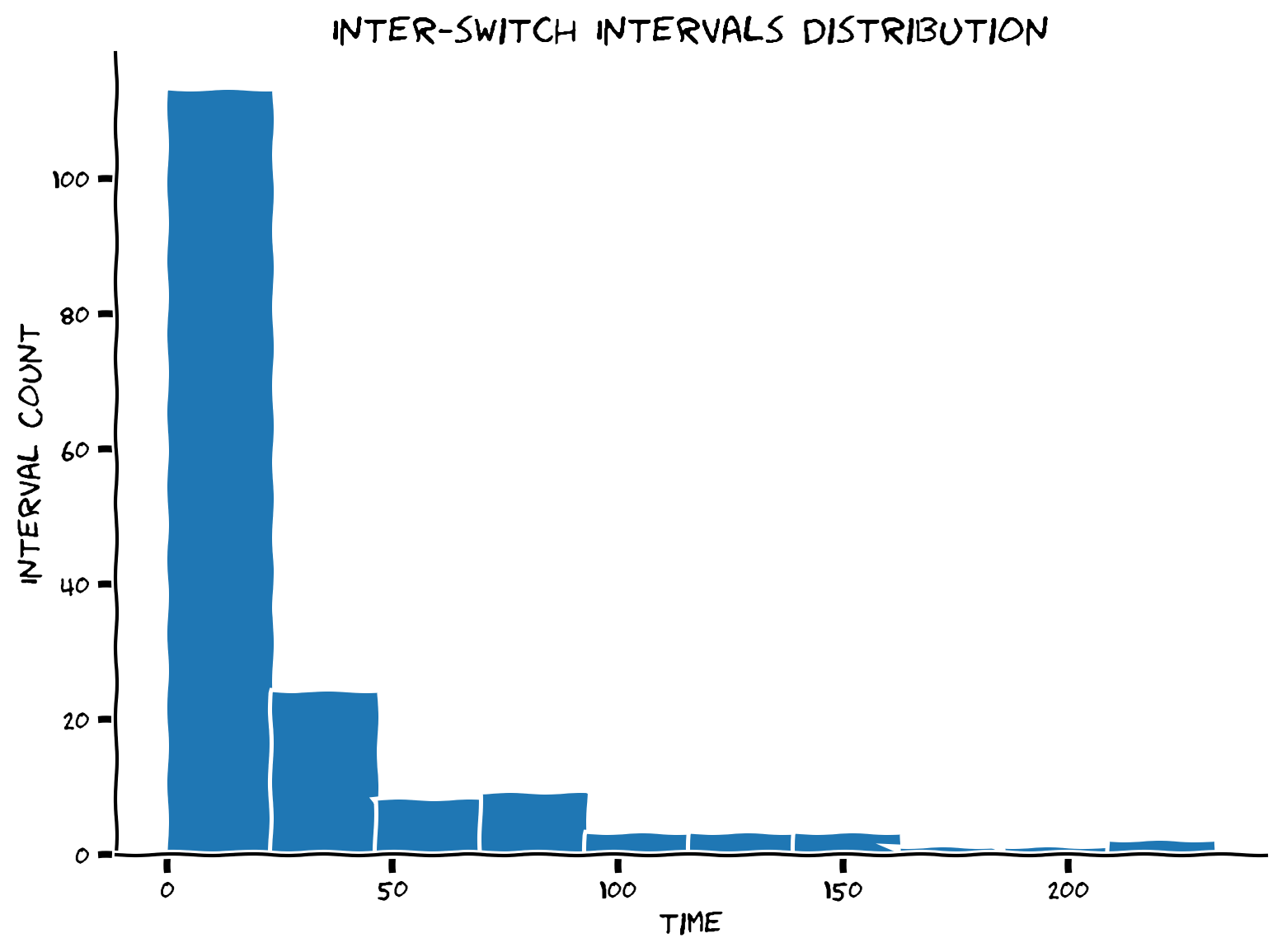 In the next cell, we generate a bar graph to visualize the distribution of the number of time-steps spent in each of the two possible system states during the simulation.

Execute cell to visualize distribution of time spent in each state. Even though the state is discrete–the ion channel can only be either Closed or Open–we can still look at the mean state of the system, averaged over some window of time.

Since we’ve coded Closed as \(x=0\) and Open as \(x=1\), conveniently, the mean of \(x\) over some window of time has the interpretation of fraction of time channel is Open.

Let’s also take a look at the fraction of Open states as a cumulative mean of the state \(x\). The cumulative mean tells us the average number of state-changes that the system will have undergone after a certain amount of time. Notice in the plot above that, although the channel started in the Closed (\(x=0\)) state, gradually adopted some mean value after some time. This mean value is related to the transition probabilities \(\mu_{c2o}\) and \(\mu_{o2c}\).

Estimated timing to here from start of tutorial: 18 min

This video serves as an introduction to the telegraph process of ion channels opening/closing with an alternative formulation as a matrix/vector representation of probabilistic state transitions.

Notice that this system is written as a discrete step in time, and \(\mathbf{A}\) describes the transition, mapping the state from step \(k\) to step \(k+1\). This is different from what we did in the exercises above where \(\mathbf{A}\) had described the function from the state to the time derivative of the state.

Referred to in video as exercise 2B

Complete the code below to simulate the propagation of probabilities of closed/open of the ion channel through time. A variable called x_kp1 (short for, \(x\) at timestep \(k\) plus 1) should be calculated per each step k in the loop. However, you should plot \(x\). Here, we simulated the propagation of probabilities of the ion channel’s state changing through time. Using this method is useful in that we can run the simulation once and see how the probabilities propagate throughout time, rather than re-running and empirically observing the telegraph simulation over and over again.

Although the system started initially in the Closed (\(x=0\)) state, over time, it settles into a equilibrium distribution where we can predict what fraction of time it is Open as a function of the \(\mu\) parameters. We can say that the plot above shows this relaxation towards equilibrium.

Re-calculating our value of the probability of \(c2o\) again with this method, we see that this matches the simulation output from the telegraph process!

Section 3: Equilibrium of the telegraph process¶

Estimated timing to here from start of tutorial: 30 min

Since we have now modeled the propagation of probabilities by the transition matrix \(\mathbf{A}\) in Section 2, let’s connect the behavior of the system at equilibrium with the eigendecomposition of \(\mathbf{A}\).

As introduced in the lecture video, the eigenvalues of \(\mathbf{A}\) tell us about the stability of the system, specifically in the directions of the corresponding eigenvectors.

hint: our simulation is written in terms of probabilities, so they must sum to 1. Therefore, you may also want to rescale the elements of the eigenvector such that they also sum to 1. These can then be directly compared with the probabilities of the states in the simulation.

In this tutorial, we learned: