Now that we’ve spent some time familiarizing ourselves with the behavior of such systems when their trajectories are (1) entirely predictable and deterministic, or (2) governed by random processes, it’s time to consider that neither is sufficient to describe neuroscience. Instead, we are often faced with processes for which we know some dynamics, but there are some random aspects as well. We call these dynamical systems with stochasticity.

This tutorial will build on our knowledge and gain some intuition for how deterministic and stochastic processes can both be a part of a dynamical system by:

To begin, let’s first take a gander at how life sometimes wanders around aimlessly. One of the simplest and best-studied living systems that has some interesting behaviors is the E. coli bacterium, which is capable of navigating odor gradients on a substrate to seek a food source. Larger life (including flies, dogs, and blindfolded humans) sometimes use the same strategies to guide their decisions.

Here, we will consider what the E. coli does in the absence of food odors. What’s the best strategy when one does not know where to head? Why, flail around randomly, of course!

The random walk is exactly that — at every time step, use a random process like flipping a coin to change one’s heading accordingly. Note that this process is closely related to Brownian motion, so you may sometimes hear that terminology used as well.

We will simulate this process below and plot the position of the bacterium as a function of the time step.

Execute to simulate a random walk Referred to in video as exercise 3A

In the previous plot, we assumed that the bacterium takes a step of size \(1\) at every point in time. Let it take steps of different sizes!

We will code a random walk where the steps have a standard normal distribution (with mean \(\mu\) and standard deviation \(\sigma\)). Instead of running one trajectory at a time, we will write our code so that we can simulate a large number of trajectories efficiently. We will combine this all into a function random_walk_simulator that generates \(N\) random walks each with \(T\) time points efficiently. 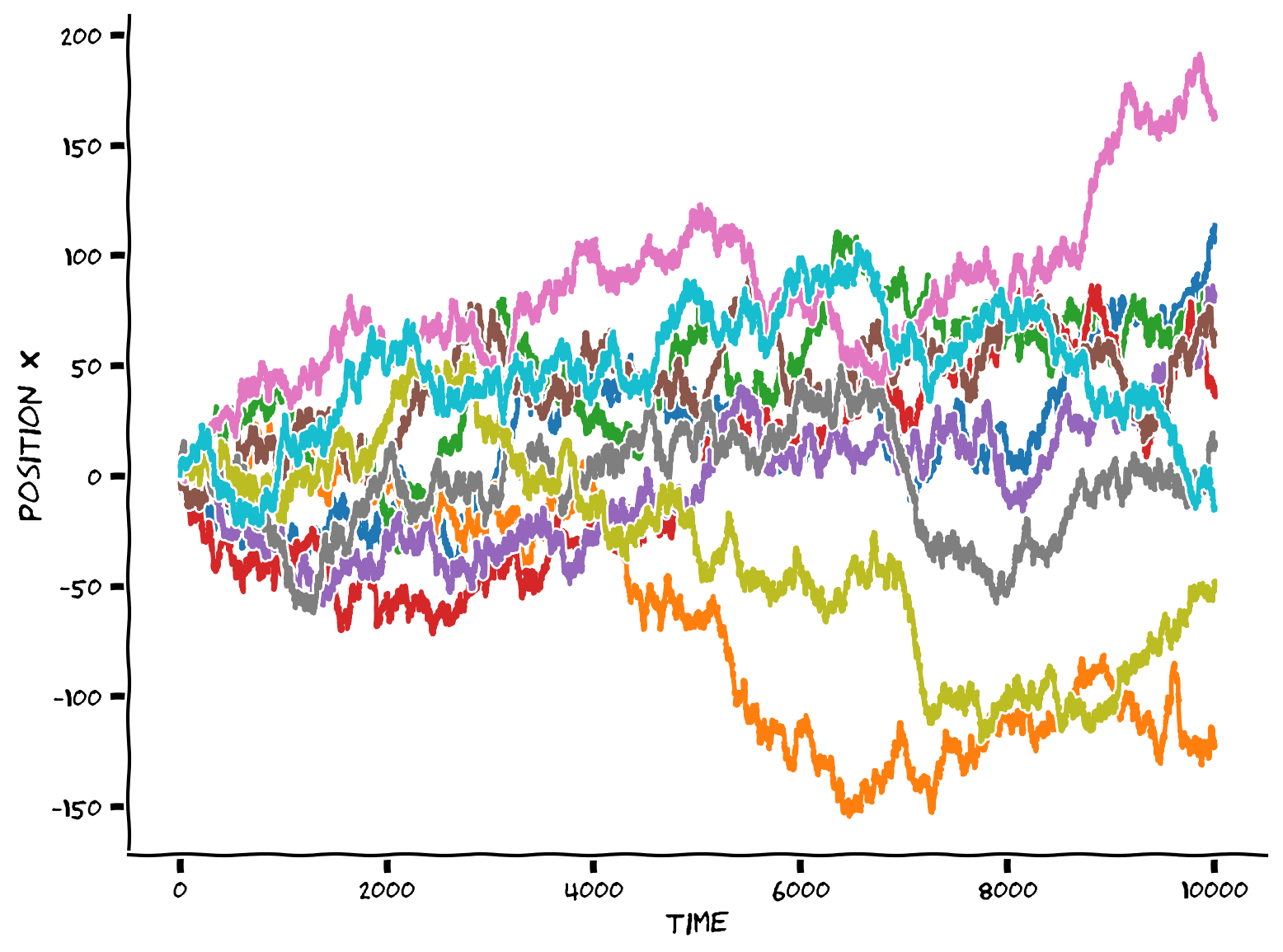 Now let’s take a look in the next cell at the distribution of bacteria positions at different points in time, analyzing all the trajectories we just generated above.

Compute and then plot the mean and variance of our bacterium’s random walk as a function of time. 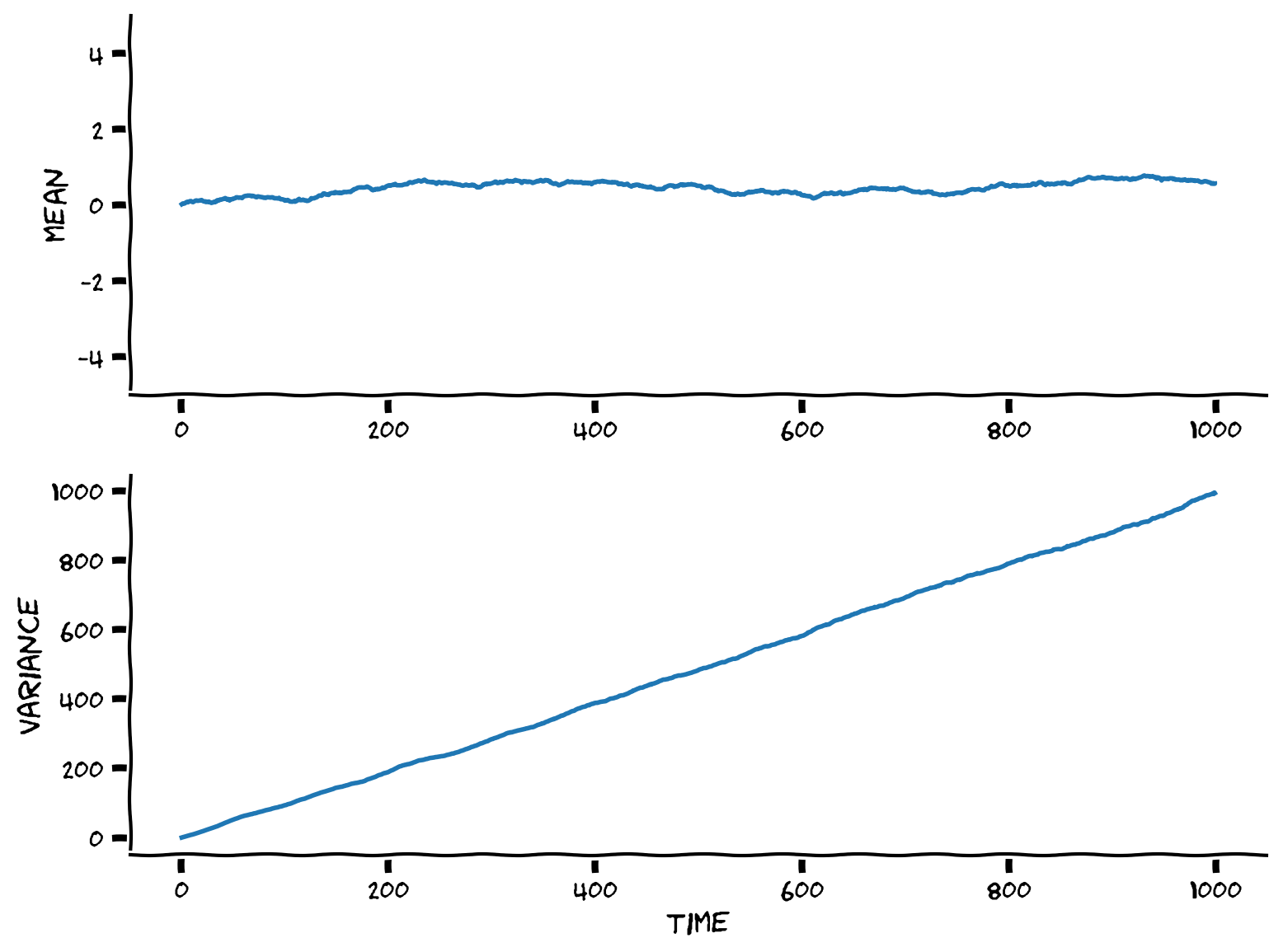 The expected value of \(x\) stays close to 0, even for random walks of very long time. Cool!

The variance, on the other hand, clearly increases with time. In fact, the variance seems to increase linearly with time!

How do the parameters \(\mu\) and \(\sigma\) of the Gaussian distribution from which we choose the steps affect the mean and variance of the bacterium’s random walk?

Estimated timing to here from start of tutorial: 14 min

The random walk process we just explored is diffusive, and the distribution of possible trajectories spreads, taking on increasing variance with time. Even so, at least in one dimension, the mean remains close to the initial value (in the example above, 0).

Our goal is now to build on this model to construct a drift-diffusion model (DDM). DDM is a popular model for memory, which as we all know, is often an exercise in hanging on to a value imperfectly. Decision-making and memory will be the topic for tomorrow, so here we build the mathematical foundations and develop some intuition for how such systems behave!

To build such a model, let’s combine the random walk model with the first differential equations we explored in Tutorial 1 earlier. Although those models had been written in continuous time as \(\dot{x} = a x\), here let’s consider the discrete version of the same system and write:

whose solution can be written as

Now, let’s simulate and plot the solution of the discrete version of our first differential equation from Tutorial 1 below. Run the code below. Notice that this process decays towards position \(x=0\). We can make it decay towards any position by adding another parameter \(x_\infty\). The rate of decay is proportional to the difference between \(x\) and \(x_\infty\). Our new system is

We have to modify our analytic solution slightly to take this into account:

Let’s simulate and plot the dynamics of this process below. Hopefully, we see that it start at \(x_0\) and decay towards \(x_{\infty}.\) Now we are ready to take this basic, deterministic difference equation and add a diffusion process on top of it! Fun times in Python land.

As a point of terminology: this type of process is commonly known as a drift-diffusion model or Ornstein-Uhlenbeck (OU) process. The model is a combination of a drift term toward \(x_{\infty}\) and a diffusion term that walks randomly. You may sometimes see them written as continuous stochastic differential equations, but here we are doing the discrete version to maintain continuity in the tutorial. The discrete version of our OU process has the following form:

Modify the code below so that each step through time has a deterministic part (hint: exactly like the code above) plus a random, diffusive part that is drawn from from a normal distribution with standard deviation of \(\sigma\) (sig in the code). It will plot the dynamics of this process. Describe the behavior of your simulation by making some observations. How does it compare to the deterministic solution? How does it behave in the beginning of the stimulation? At the end?

Section 3: Variance of the OU process¶

Estimated timing to here from start of tutorial: 35 min

As we can see, the mean of the process follows the solution to the deterministic part of the governing equation. So far, so good!

But what about the variance?

Unlike the random walk, because there’s a decay process that “pulls” \(x\) back towards \(x_\infty\), the variance does not grow without bound with large \(t\). Instead, when it gets far from \(x_\infty\), the position of \(x\) is restored, until an equilibrium is reached.

The equilibrium variance for our drift-diffusion system is

To convince ourselves that things are behaving sensibly, let’s compare the empirical variances of the equilibrium solution to the OU equations with the expected formula.

Write code to compute the analytical variance: \(\text{Var} = \frac{\sigma^2}{1 - \lambda^2}\), and compare against the empirical variances (which is already provided for you using the helper function). You should see that they should be about equal to each other and lie close to the 45 degree (\(y=x\)) line. In this tutorial, we have built and observed OU systems, which have both deterministic and stochastic parts. We see that they behave, on average, similar to our expectations from analyzing deterministic dynamical systems.

Importantly, the interplay between the deterministic and stochastic parts serve to balance the tendency of purely stochastic processes (like the random walk) to increase in variance over time. This behavior is one of the properties of OU systems that make them popular choices for modeling cognitive functions, including short-term memory and decision-making.