In this tutorial, we will use the leaky integrate-and-fire (LIF) neuron model (see Tutorial 1) to study how they transform input correlations to output properties (transfer of correlations). In particular, we are going to write a few lines of code to:

The helper function contains the:

Correlation or synchrony in neuronal activity can be described for any readout of brain activity. Here, we are concerned with the spiking activity of neurons.

In the simplest way, correlation/synchrony refers to coincident spiking of neurons, i.e., when two neurons spike together, they are firing in synchrony or are correlated. Neurons can be synchronous in their instantaneous activity, i.e., they spike together with some probability. However, it is also possible that spiking of a neuron at time \(t\) is correlated with the spikes of another neuron with a delay (time-delayed synchrony).

When neurons spike together, they can have a stronger impact on downstream neurons. Synapses in the brain are sensitive to the temporal correlations (i.e., delay) between pre- and postsynaptic activity, and this, in turn, can lead to the formation of functional neuronal networks - the basis of unsupervised learning (we will study some of these concepts in a forthcoming tutorial).

Synchrony implies a reduction in the dimensionality of the system. In addition, correlations, in many cases, can impair the decoding of neuronal activity.

A simple model to study the emergence of correlations is to inject common inputs to a pair of neurons and measure the output correlation as a function of the fraction of common inputs.

Here, we are going to investigate the transfer of correlations by computing the correlation coefficient of spike trains recorded from two unconnected LIF neurons, which received correlated inputs.

where \(\mu_i\) is the temporal average of the current. The Gaussian white noise \(\xi_i\) is independent for each neuron, while \(\xi_c\) is common to all neurons. The variable \(c\) (\(0\le c\le1\)) controls the fraction of common and independent inputs. \(\sigma_i\) shows the variance of the total input.

So, first, we will generate correlated inputs.

Coding Exercise 1A: Compute the correlation¶

where \(\bar{I}_i\) is the sample mean, k is the time bin, and L is the length of \(I\). This means that \(I_i^k\) is current i at time \(k\cdot dt\). Note that the equations above are not accurate for sample covariances and variances as they should be additionally divided by L-1 - we have dropped this term because it cancels out in the sample correlation coefficient formula. 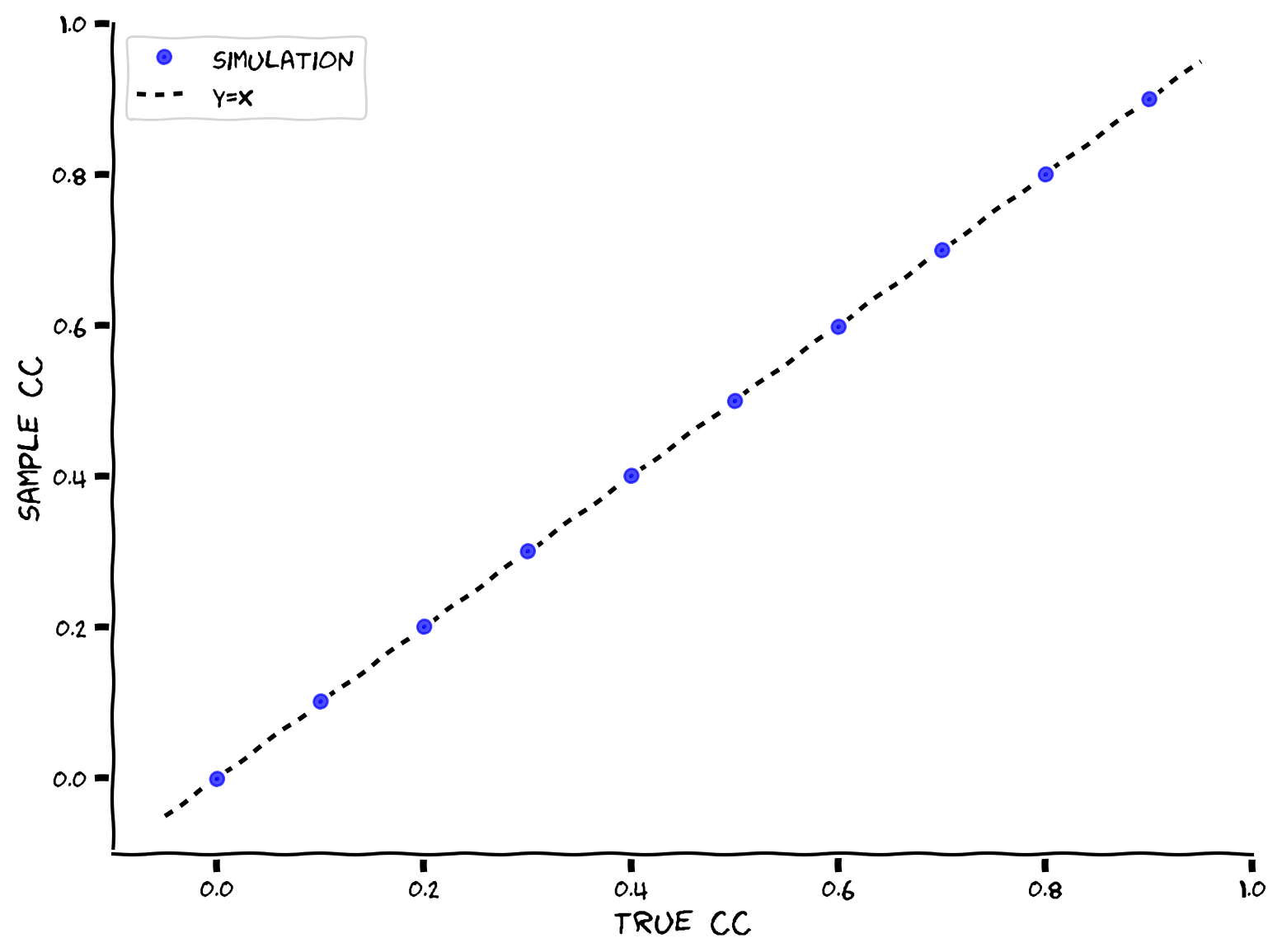 In the following cell, we provide a helper function Poisson_generator and then use it to produce a Poisson spike train.

Execute this cell to get helper function Poisson_generator Coding Exercise 1B: Measure the correlation between spike trains¶

After recording the spike times of the two neurons, how can we estimate their correlation coefficient?

Estimated timing to here from start of tutorial: 20 min

In the following, you will inject correlated GWN in two neurons. You need to define the mean (gwn_mean), standard deviation (gwn_std), and input correlations (c_in).

Do not forget to execute this cell to simulate the LIF

You will explore these questions in the next figure but try to develop your own intuitions first!

Let’s vary c_in and plot the relationship between the c_in and output correlation. This might take some time depending on the number of trials.

Don’t forget to execute this cell!

Estimated timing to here from start of tutorial: 30 min

Section 3.1: How do the mean and standard deviation of the Gaussian white noise (GWN) affect the correlation transfer function?¶

What would you expect to happen to the slope of the correlation transfer function if you vary the mean and/or the standard deviation of the GWN of the inputs ?

Why do both the mean and the standard deviation of the GWN affect the slope of the correlation transfer function?

Therefore, when we varied \(\mu\) and/or \(\sigma\) of the GWN, we mimicked a change in the input firing rate. Note that, if we change the firing rate, both \(\mu\) and \(\sigma\) will change simultaneously, not independently.

In this tutorial, we studied how the input correlation of two LIF neurons is mapped to their output correlation. Specifically, we:

Here, we were concerned with zero time lag correlation. For this reason, we restricted estimation of correlation to instantaneous correlations. If you are interested in time-lagged correlation, then we should estimate the cross-correlogram of the spike trains and find out the dominant peak and area under the peak to get an estimate of output correlations.

We leave this as a future to-do for you if you are interested.

If you have time, check out the bonus video to think about responses of ensembles of neurons to time-varying input.

Finally, there is a short BONUS lecture video on the firing response of an ensemble of neurons to time-varying input. There are no associated coding exercises - just enjoy.

Video 2: Response of ensemble of neurons to time-varying input¶