We will cover the basic ideas from probability and statistics, as a reminder of what you have hopefully previously learned. These ideas will be important for almost every one of the following topics covered in the course.

There are many additional topics within probability and statistics that we will not cover as they are not central to the main course. We also do not have time to get into a lot of details, but this should help you recall material you have previously encountered.

By completing the exercises in this tutorial, you should:

Before trying out different probability distributions, let’s start with the simple uniform distribution, U(a,b), which assigns equal probability to any value between a and b.

To show that we are drawing a random number \(x\) from a uniform distribution with lower and upper bounds \(a\) and \(b\) we will use this notation: \(x \sim \mathcal{U}(a,b)\). Alternatively, we can say that all the potential values of \(x\) are distributed as a uniform distribution between \(a\) and \(b\). \(x\) here is a random variable: a variable whose value depends on the outcome of a random process.

Numpy has many functions and capabilities related to randomness. We can draw random numbers from various probability distributions. For example, to draw 5 uniform numbers between 0 and 100, you would use np.random.uniform(0, 100, size = (5,)).

Below, you will complete a function generate_random_sample that randomly generates num_points \(x\) and \(y\) coordinate values, all within the range 0 to 1. You will then generate 10 points and visualize. 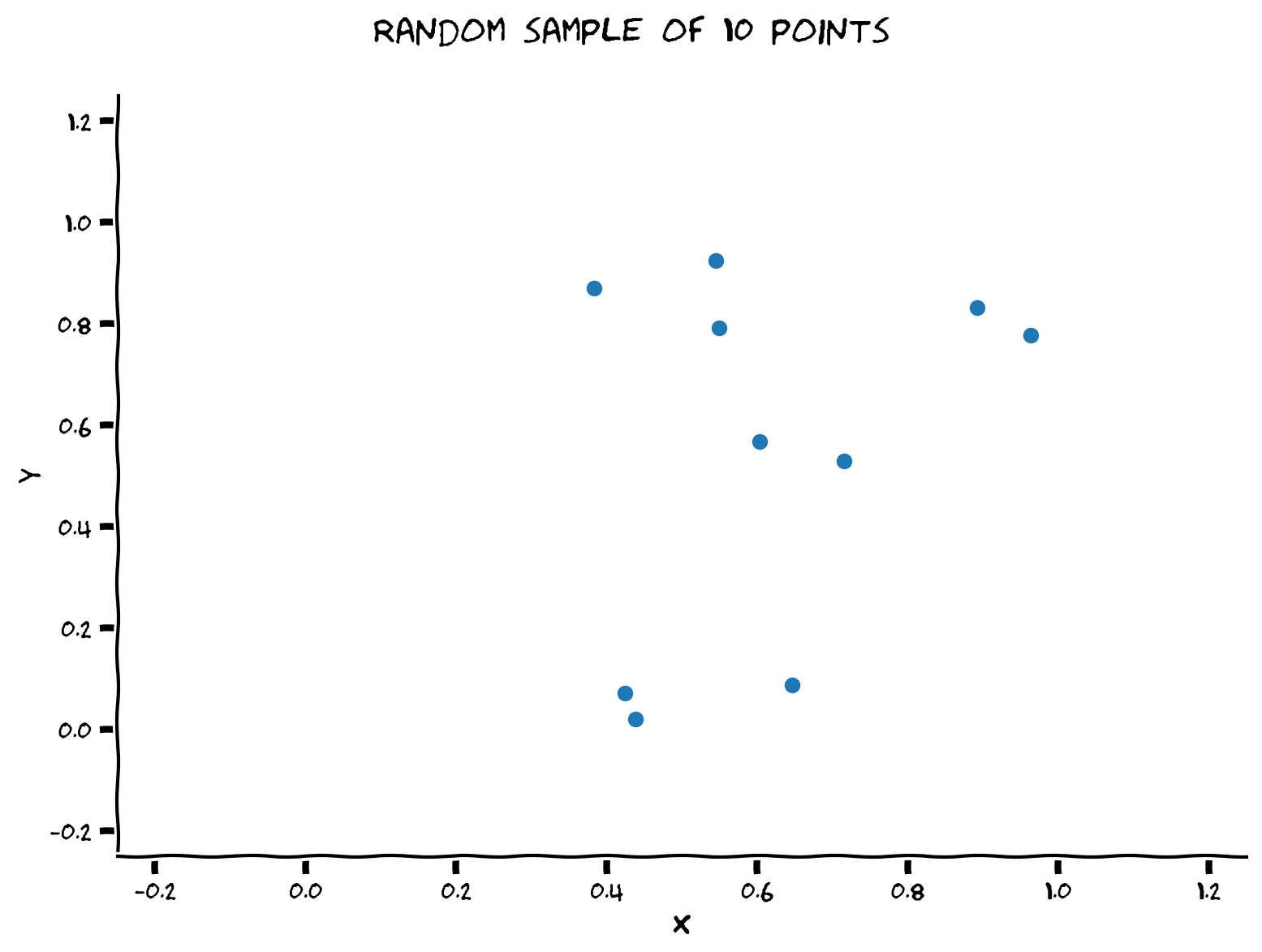 In practice this may not look very uniform, although that is of course part of the randomness! Uniform randomness does not mean smoothly uniform. When we have very little data it can be hard to see the distribution.

Below, you can adjust the number of points sampled with a slider. Does it look more uniform now? Try increasingly large numbers of sampled points.

Stochastic models can be used to create models of behaviour. As an example, imagine that a rat is placed inside a novel environment, a box. We could try and model its exploration behaviour by assuming that for each time step it takes a random uniformly sampled step in any direction (simultaneous random step in x direction and random step in y direction) 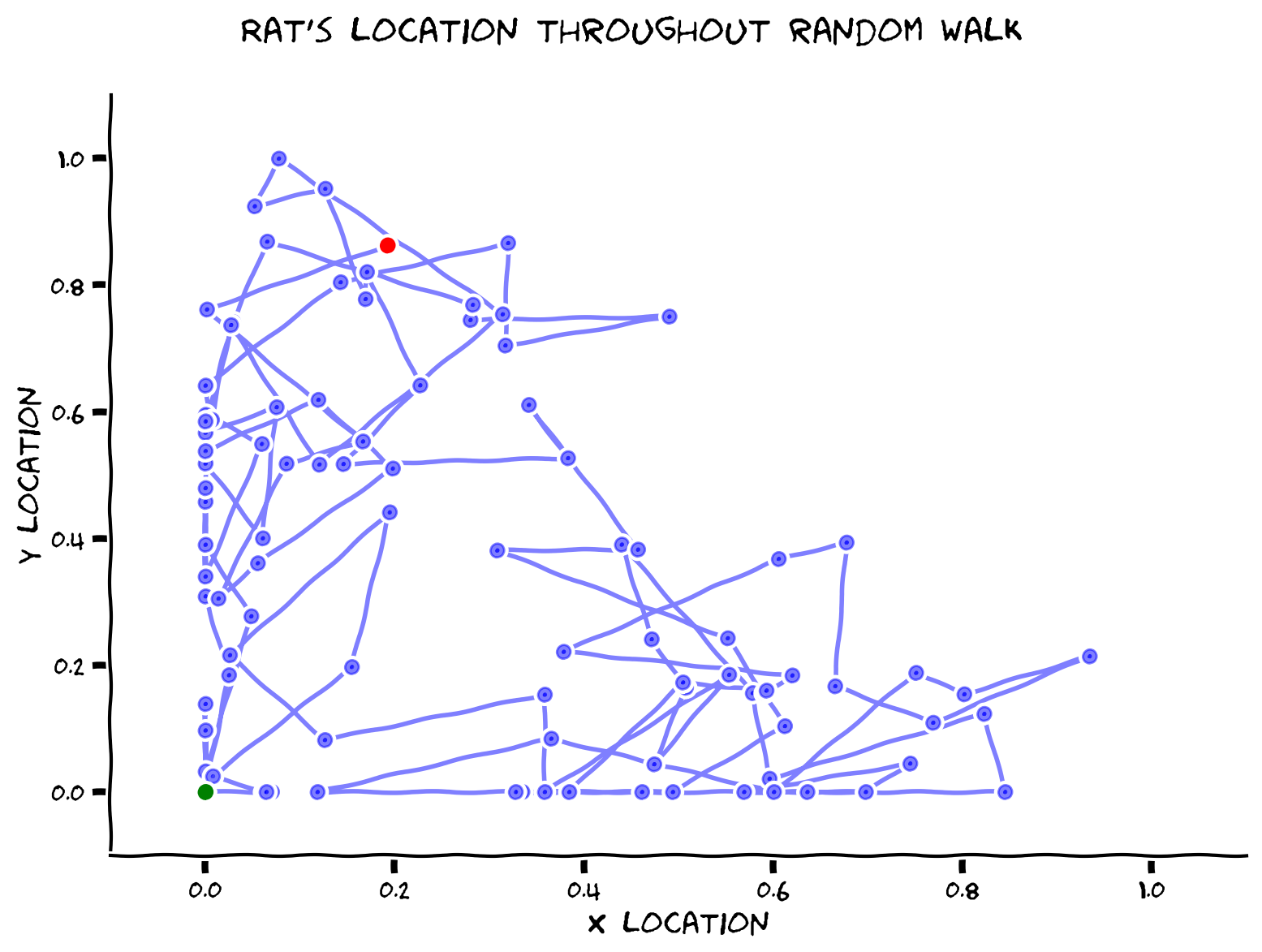 We put a little green dot for the starting point and a red point for the ending point.

In the interactive demo below, you can examine random walks with different numbers of steps or step sizes, using the sliders.

In practice a uniform random movement is too simple an assumption. Rats do not move completely randomly; even if you could assume that, you would need to approximate with a more complex probability distribution.

Nevertheless, this example highlights how you can use sampling to approximate behaviour.

Main course preview: On day W3D2 we will see how random walk models can be used to also model accumulation of information in decision making.

This video covers the Bernoulli and binomial distributions.

The binomial distribution simulates \(n\) number of binary events, such as the \(Left, Right\) choices of the random rat in the T-maze. Imagine that you have done an experiment and found that your rat turned left in 7 out of 10 trials. What is the probability of the rat indeed turning left 7 times (\(k = 7\))?

This is an example of a probability mass function, which specifies the probability that a discrete random variable is equal to each value. In other words, how large a part of the probability space (mass) is placed at each exact discrete value. We require that all probability adds up to 1, i.e. that

Essentially, if \(k\) can only be one of 10 values, the probabilities of \(k\) being equal to each possible value have to sum up to 1 because there is a probability of 1 it will equal one of those 10 values (no other options exist).

If we assume an equal chance of turning left or right, then \(p=0.5\). Note that if we only have a single trial \(n=1\) this is equivalent to a single Bernoulli trial (feel free to do the math!).

See below to visualize a histogram of the different values of \(k\), or the number of times the rat turned left in each of the 1000 samples. In a histogram all the data is placed into bins and the contents of each bin is counted, to give a visualisation of the distribution of data. Discuss the following questions. When working with the Bernoulli and binomial distributions, there are only 2 possible outcomes (in this case, turn left or turn right). In the more general case where there are \(n\) possible outcomes (our rat is an n-armed maze) each with their own associated probability \(p_1, p_2, p_3, p_4, ...\) , we use a categorical distribution. Draws from this distribution are a simple extension of the Bernoulli trial: we now have a probability for each outcome and draw based on those probabilities. We have to make sure that the probabilities sum to one:

This video covers the Poisson distribution and how it can be used to describe neural spiking.

The formula for a Poisson distribution on \(x\) is:

where \(\lambda\) is a parameter corresponding to the average outcome of \(x\).

In the exercise below we will draw some samples from the Poisson distribution and see what the histogram looks.

In the code, fill in the missing line so we draw 5 samples from a Poisson distribution with \(\lambda = 4\). Use np.random.poisson.

You should see that the neuron spiked 6 times, 7 times, 1 time, 8 times, and 4 times in 5 different intervals.

Use the interactive demo below to vary \(\lambda\) and the number of samples, and then visualize the resulting histogram.

We do not have to restrict ourselves to only probabilistic models of discrete events. While some events in neuroscience are discrete (e.g. number of spikes by a neuron), many others are continuous (e.g. neuroimaging signals in EEG or fMRI, distance traveled by an animal, human pointing in a direction of a stimulus).

With continuous distributions we have to replace the normalising sum

over all possible events, with an integral

The most widely used continuous distribution is probably the Gaussian (also known as Normal) distribution. It is extremely common across all kinds of statistical analyses. Because of the central limit theorem, many quantities are Gaussian distributed. Gaussians also have some nice mathematical properties that permit simple closed-form solutions to several important problems.

As a working example, imagine that a human participant is asked to point in the direction where they perceived a sound coming from. As an approximation, we can assume that the variability in the direction/orientation they point towards is Gaussian distributed.

In this exercise, you will implement a Gaussian by filling in the missing portions of code for the function my_gaussian below. Gaussians have two parameters. The mean \(\mu\), which sets the location of its center, and its “scale” or spread is controlled by its standard deviation \(\sigma\), or variance \(\sigma^2\) (i.e. the square of standard deviation). Be careful not to use one when the other is required.

The equation for a Gaussian probability density function is:

As a probability distribution this has an integral of one when integrated from \(-\infty\) to \(\infty\), however in the following your numerical Gaussian will only be computed over a finite number of points (for the cell below we will sample from -8 to 9 in step sizes of 0.1). You therefore need to explicitly normalize it to sum to one yourself. 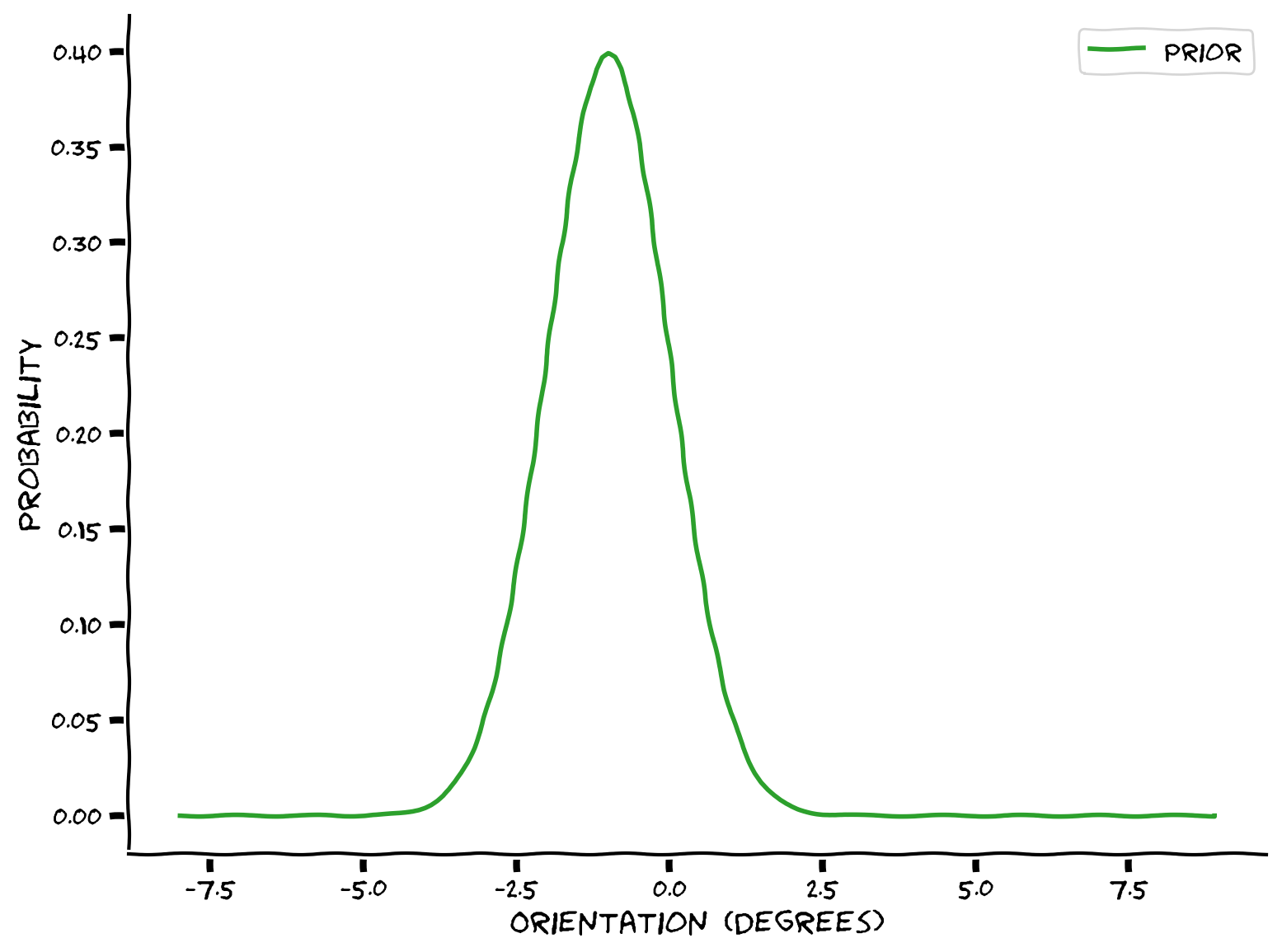 Now that we have gained a bit of intuition about the shape of the Gaussian, let’s imagine that a human participant is asked to point in the direction of a sound source, which we then measure in horizontal degrees. To simulate that we draw samples from a Normal distribution:

We can sample from a Gaussian with mean \(\mu\) and standard deviation \(\sigma\) using np.random.normal(mu, sigma, size = (n_samples,)).

In the demo below, you can change the mean and standard deviation of the Gaussian, and the number of samples, we can compare the histogram of the samples to the true analytical distribution (in red).

Across the different exercises you should now:

For more reading on these topics see just about any statistics textbook, or take a look at the online resources.